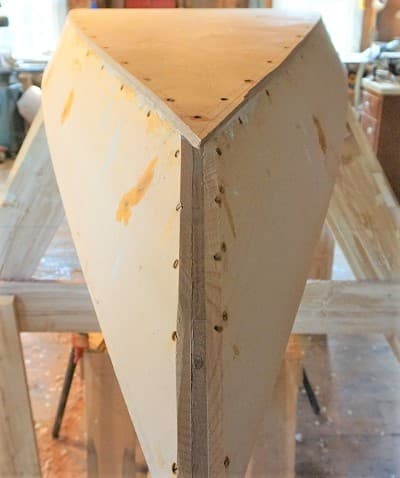 The 12.33-foot Yankee Tender is a modification of the classic Asa Thompson rowing skiff. I selected this design due to its graceful lines, roomy interior, and ease of construction. The main features of the original plan are a flat cross-planked double bottom, lap strake sides, and generous rocker from fore to aft. The clearly presented plans are available from The Woodenboat Store in Brooklin, ME. Although not every step of construction is documented here I hope that sufficient detail is evident to inform any future effort to fabricate this boat in your shop. This section will be updated as construction proceeds.

Figure 1 shows the building plan viewed from both above and below. Construction proceeds on the raised V-shaped base of 2 x 6 beams shown. The cross-planked inner bottom and 4-strake sides are made from white pine. Other main items such as chines, frames, stem, skeg, rails, and keel are made of oak. The transom, quarter knees, and breastplate are mahogany. I opted to forego the cross-planked outer bottom in favor of a continuous covering of 3/8” Okoume marine plywood. This reinforces waterproofing and resists movement due to swelling/shrinking. Silicon bronze fasteners are used throughout.

Figure 2 shows the Yankee Tender in profile view. Stations 1-3 correspond to positions of the molds defining the curvature of the lapstrake planking. Note that large “+” denotes screw fastening while small “+” shows the 2” spacing of copper clench nails joining the strakes. The edges where the 3/8” thick white pine strakes join are beveled (3/4” wide) to give a lighter appearance to the construction. The gentle lines inherent in the design precluded any necessity to steam-treat planks or chines prior to bending. 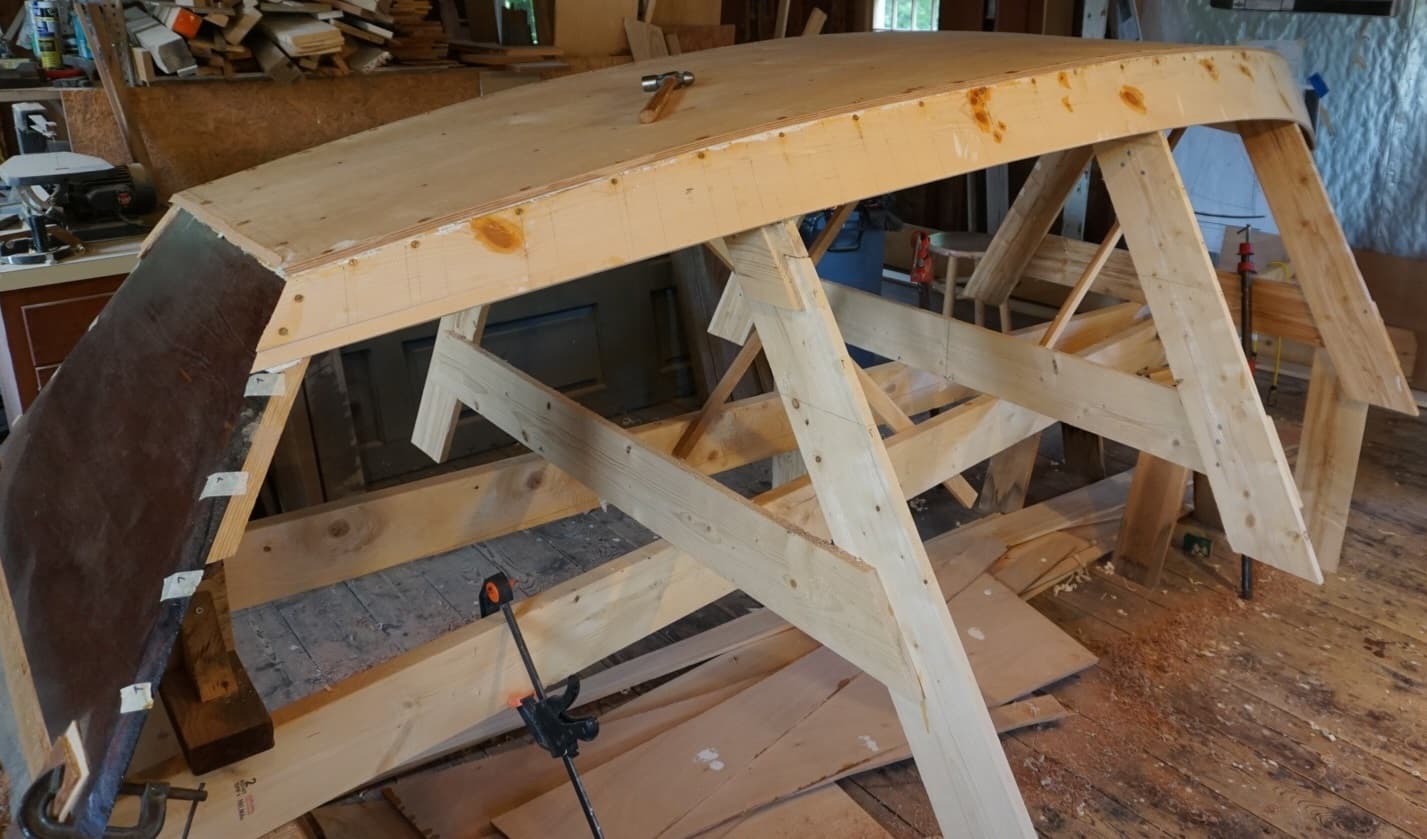 Figure 3 shows the overall current stage of construction in which the bottom is complete and the garboard planks are in place. The positioning of the straight-sided molds on the raised base (neither to become part of the finished boat) is clearly depicted in this photo and consistent with the plan of Figure 1. The chines are hidden in this view but the fastenings for the outer bottom and garboard to the chines are evident. Also hidden in this view is the 5” wide strongback spanning the transom, molds, and stem giving rigidity to the whole structure. Masking tape markers on the molds and transom indicate edge positions of the successive strakes. These markers are used along with a spiling batten to get out the shapes of the strakes from 3/8” thick pine boards. 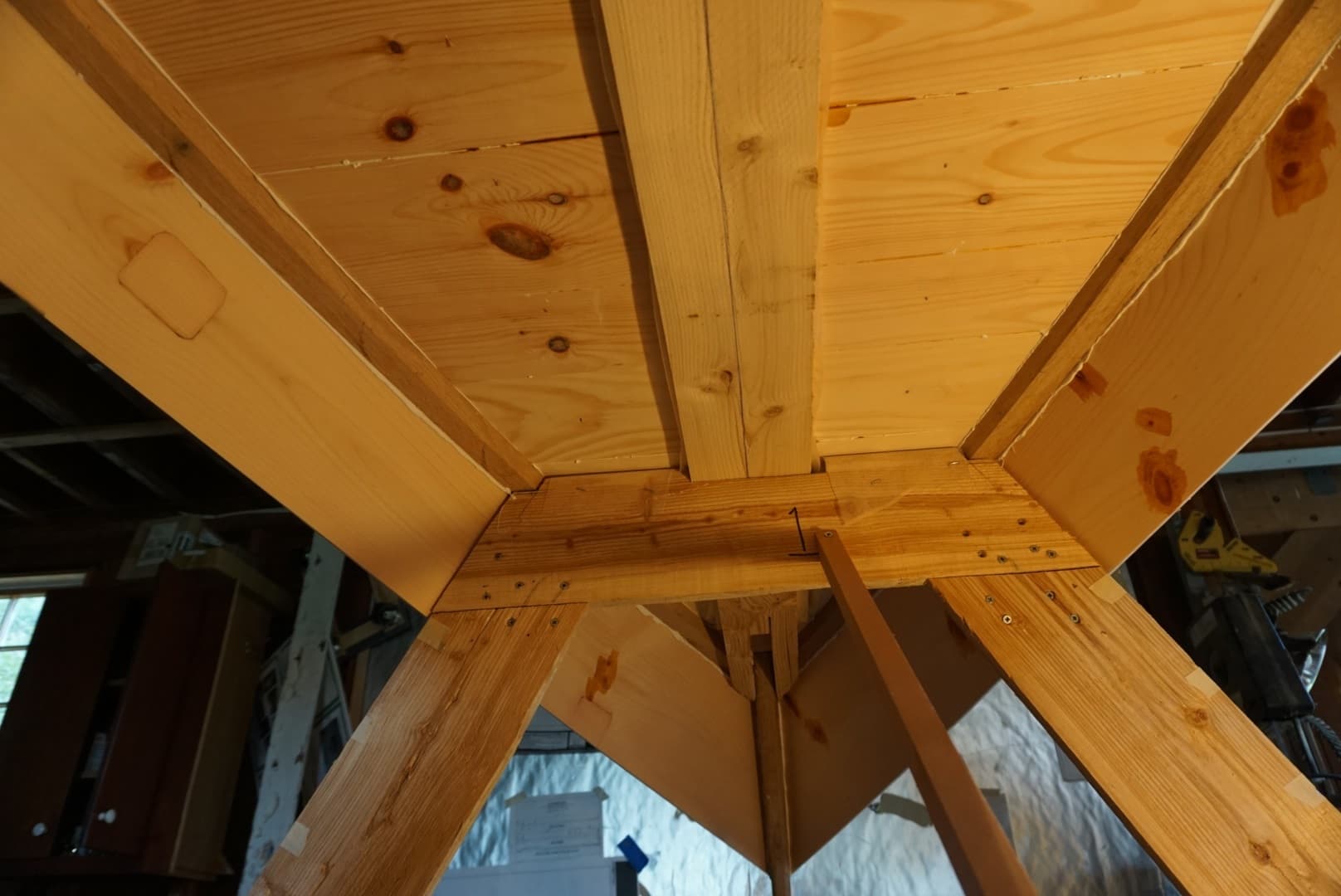 Figure 4 is an underside view looking toward the stem intended to show the cross planked inner bottom of the boat. The strongback is shown along with squeeze-out from the 3M 5200 silicone sealant around the chines. 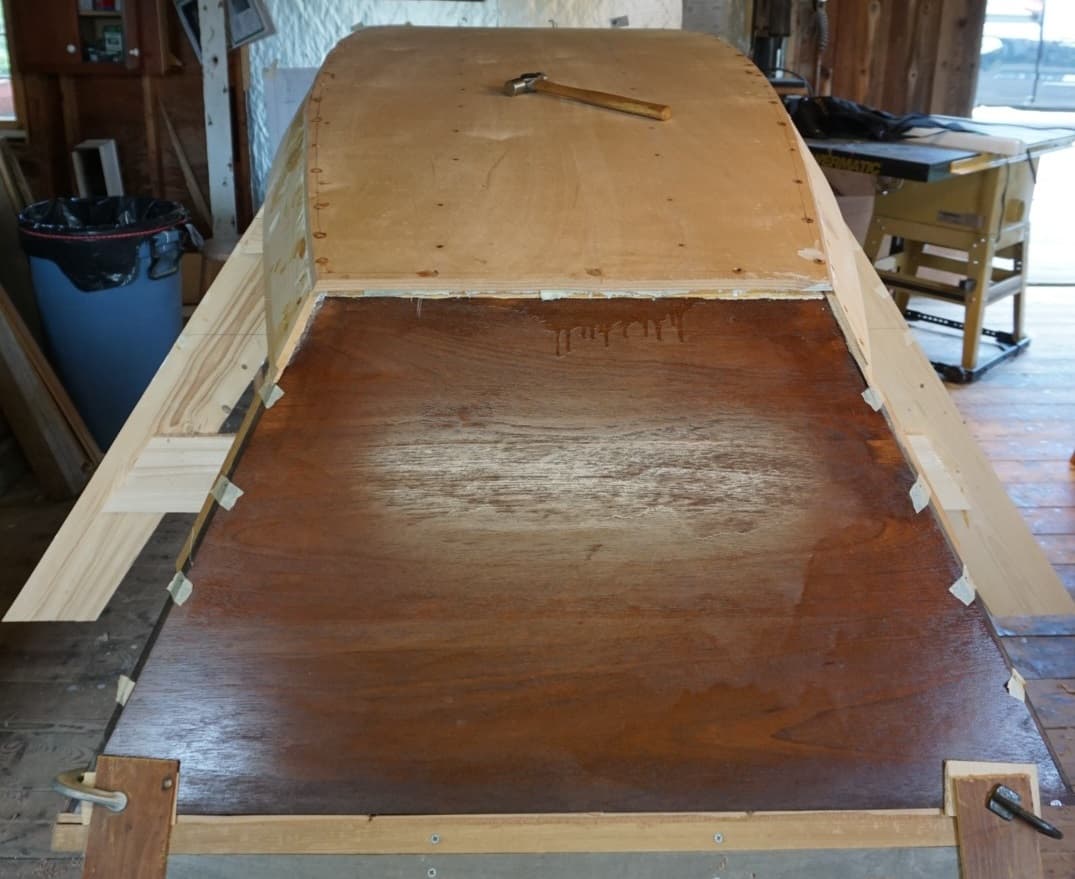 Figure 5 is a better view of the plywood outer bottom. Two rows of clench nails further secure the outer bottom to the inner bottom. It is important to note that a layer of muslin saturated with a 50:50 mixture of woodsealer and oil-base paint separates the two bottom layers to block any water penetration. 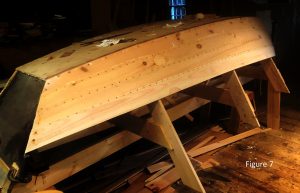 Figure 7 shows the completion of planking while the boat is still on the molds. I found that planking is not as simple as expected. The Woodenboat plans outline the methodology in good detail but I had trouble getting the second plank to mate flush with the garboard. The plan details positions of the sheer-facing edges of each plank on the transom, molds, and stem. These measurements encode plank shape and serve as reference points for transfer of this information to a blank (spiling). I stretched a 3/8”-thick batten to connect the five edge points for each plank and then added two more reference points between each adjoining pair of original points for a similarly spaced total of 13. This transferred shape information more accurately to the plank source board. I also noticed that a thin spiling batten did not approximate well the anticipated conformation of the plank along the relatively severe curvature extending from stem to transom. So, I used a spiling batten of the same thickness as the plank (3/8”) to get a fairer (eye-sweet) lay. These modifications helped a lot.

Figures 8 and 9 show the fully planked boat off the molds. Note that the planks were joined at beveled laps of ¾” width pre-treated with wood sealer. I used ¾” copper clench nails spaced every 2”. My errant hammer blows inevitably resulted in bruising of the surrounding wood. Acting on a tip from a boatbuilder friend I misted the planks with warm water. This prompted the wood fibers to swell eliminating bruises. A dividend was that swelling also countersunk the nail heads so that putty should completely hide these. Incidentally, this treatment applied before final sanding is effective in achieving a smoother surface. After confirming symmetry along the midline axis and a lack of twist in the hull, I next established a faired sheer line by mounting a batten from the FP to the AP along the top edge on one side of the boat. I then planed down to the batten. This finished profile was transferred to the opposite sheer using a level spanning across the beam at several points along the sheer line. 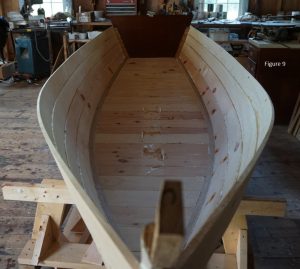 With the inside of the boat unobstructed it was a good time to clean up this area. Squeezeout of silicone sealant was trimmed away and the entire inside was sanded down to 220 grit. Two coats of wood sealer were applied followed by another sanding. The entire inside was painted with an oil-based primer. Nail holes were filled with a surfacing putty. Gaps between adjoining planks were filled with a mixture of primer and commercial whiting having a consistency like honey. The final sanding left a homogeneous surface free of flaws and ready for the next step- FRAMING. 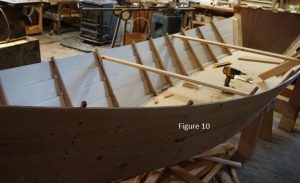 Figure 10 shows the framing process at about midway. Twelve equally spaced white oak frames are mounted on each side. Details are included in the Woodenboat plans. A scribing compass was used to transfer the hull profile to an oak blank at each position. The fit was fine-tuned by using a file saw to shape the frame. A gap in the fit is left at each lap to discourage trapping of rainwater at the lap-frame junction. I started in the middle and installed frames at every other position so as not to introduce distortion of hull shape. The rest went in later. The photo shows temporary cross spalls added prior to framing to add rigidity.

Contact me directly for sales inquiries and custom jobs.